The first woman to ever compete in the Boston Marathon crossed the finish line again a half-century after since she was nearly thrown out by an official. Kathrine Switzer was among many inspirational runners at the 2017 race.

On April 17, 2017,  Ms Switzer, now 70, finished the marathon in the US city once again, this time accompanied by hundreds of supporters who ran alongside her.

Switzer first ran the Boston Marathon in 1967, when women were not allowed to compete. A Syracuse University journalism student, she entered the race under her initials, K.V. Switzer. She claims that there were not any official rules written that said only men could enter the race. 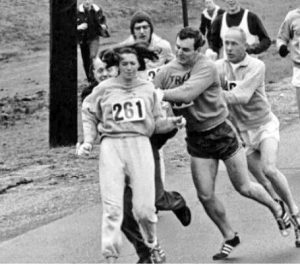 She wore her original number – 261 – which was retired by race organisers after she crossed the finish line as a mark of honour. 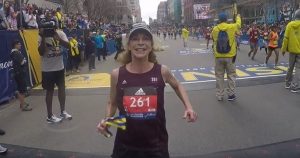 Before the race, she wrote on Facebook: “Today is the race of my life. After all the marathons I’ve run, this may be the most important of all. Who would have imagined, 50 years later and still toeing the line!

Then she added: “I finished, like I did 50 years ago. We are here to change the life of women. Just imagine what’s gonna happen in 50 years!”