An Island In Louisiana’s Bayou Is Vanishing, And Its Residents Are Fleeing To Higher Ground

Since the middle of the last century more than 90 percent of Isle de Jean Charles has dissolved into the southern Louisiana bayou.

The island, which is connected to the outside world by a road that’s known to flood in perfect weather, is home to a tribe of Native Americans who have fished and hunted there since the 1800s.

Those who remain are barely clinging to what’s left.

“The island is going under,” says Rita Falgout, a longtime resident in her 80s. “The whole thing is going to be underwater soon. Get another hurricane, and we’re gone.”

Last year the state of Louisiana announced a $48 million grant from the federal government to resettle about 100 members of the island’s Biloxi-Chitimacha-Choctaw tribe.

At 81, Falgout’s husband, Rooster, is reluctant to leave the island. But Rita Falgout is ready to go.

“It’s totally different than when I grew up,” she says. 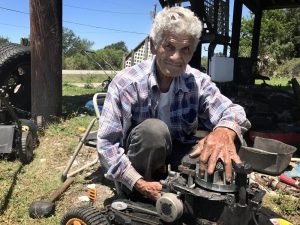 Rooster Falgout, 81, at his home in Isle de Jean Charles, La. The state is moving residents to higher ground.

The encroaching salt water has killed off bountiful fruit trees and permanently flooded fields once used for farming and trapping. Falgout’s granddaughter, a diabetic, had to move away. She couldn’t risk getting cut off from doctors in a flood.

The crisis on Isle de Jean Charles is a preview of what’s to come across the entire region, according to state officials. The fragile marshland of the Mississippi River Delta is sinking. Years of flood prevention have plugged the flow of sediment that naturally builds up the land.

As a result, the coast is eroding at an alarming rate.

Scientists say up to a football field of land vanishes every hour in Louisiana. And state officials predict that sea level rise will compound an already urgent problem.

“We understand that it’s a really tragic set of circumstances,” says Mathew Sanders, who works with state’s office of community development to resettle the tribe.

The agency has identified three potential parcels, between 300 and 600 acres, in Terrebonne Parish, Sanders says. The state is looking for a place that’s similar culturally and historically to the home the islanders are leaving. The new houses will be raised up on stilts to protect against hurricanes and flooding.

Moving is voluntary. But of the 29 households on the island, all but three understand it’s time to go, Sanders says. The resettlement project will be a blueprint for the future.

“We’re certainly going to have to use it again,” Sanders says. “We have communities that from a physical and environmental standpoint will not survive over the decades to come. We can either sit around and wait for that degradation to happen over time — or in an instant through a significant disaster event — or we can be proactive.”

Construction could start next year, and when the residents pack up and move they will be among the first climate refugees in the United States.

Tribal leaders hope that family members who have already fled the island will settle in the new community.

“They want to live together again,” says Heather Stone, an oral historian at the University of Louisiana Lafayette who has been documenting the lives of island residents. “They don’t want to live in a subdivision. They want to live where they have land for buffalo and a place to shrimp. They’re not asking for too much.” 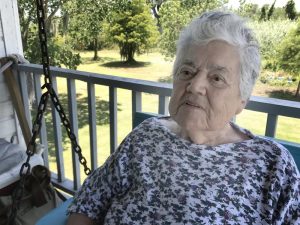 Denecia Billiot, who is in her 90s, says she will reluctantly leave the island where she and her husband Wenceslaus grew up.

Some people on the island know they may never see a new home. Wenceslaus and Denecia Billiot are in their 90s and frail. They spend their afternoons on an elevated porch overlooking the levee and their lush backyard.

Occasionally their conversation slips into the French they grew up learning on the bayou.

But her husband says it’s time to go. Isle de Jean Charles has changed too much. The marshland where he grew up trapping muskrat and raccoon has vanished, and the next storm could wash the rest away.

“I’m going to miss this place,” he says, recounting the island’s former bounty. «But no more. Now everything is gone.”