Cop shot on the job was Mother of three children

Familia, a 12-year veteran, was gunned down by Alexander Bonds, 34, while sitting in a police vehicle at East 183rd […]

Familia, a 12-year veteran, was gunned down by Alexander Bonds, 34, while sitting in a police vehicle at East 183rd Street and Morris Avenue in Fordham Heights.

She was taken to St. Barnabas Hospital, where she was pronounced dead about three hours later.

The gunman was fatally shot by the police a short time later, after he drew a gun, the police said. Mr. Bonds was paroled four years ago after serving seven years in state prison.

Officer Familia became a police officer at age 36 after holding a number of different jobs. 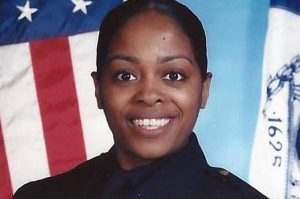 “Police officer Miosotis Familia, the mother of three, gave her life protecting a neighborhood that had been plagued by gang gun violence. Fully knowing the dangers that she faced, she suited up in uniform everyday and stood tall against those who threaten and terrorize the good folks of the Bronx,” the president of the Patrolmen’s Benevolent Association said in a statement.