July 17, 2017 An Italian pianist and mountaineer Elisa Tomellini performed the ‘world’s highest piano concert in the Alps at […]

An Italian pianist and mountaineer Elisa Tomellini performed the ‘world’s highest piano concert in the Alps at an altitude of 4,460 metres.

She told The Local she decided to do the concert “in order to close the circle of my two lives, that of a pianist and the life in which I temporarily abandoned music to discover the beauty of the world”. 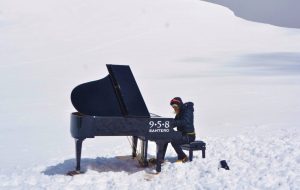 “I also wanted to bring music and the mountain into people’s hearts, and to help people in doing so,” said Tomellini, who plans to donate proceeds raised by the concert to a Nepalese children’s home.

Despite being an experienced mountaineer, she described the act of performing on the mountain as making her feel “small in comparison to nature”.

Elisa climbed the mountain herself to 4460 metres altitude and a helicopter transported her grand piano to her. The pianist had a crew of four with her to film the project, and the full concert will later be broadcast on Sky and National Geographic, as well as being released on DVD. 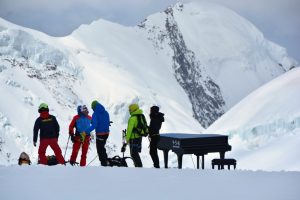 “Every so often it’s important to realize the proportion of things. I was cold and scared of not being able to finish; I’m still very emotional and happy to have arrived on my own feet and to have played with my hands,” she added.

Temperatures on the mountain were -15C while Tomellini played, and it was a windy day, but she played the full concert, wearing thick gloves.

Monte Rosa lies in the east of the Pennine Alps and stands at 4634 metres high. It’s the highest point in Switzerland.