British cancer boy, 10, is ready to head home in REMISSION after receiving life-saving treatment in the US

A 10-year-old boy from England who has spent the last nine months receiving cancer treatment in America is finally healthy and headed home in less than a month.

Alex Goodwin traveled from Leicester to Kansas late last year in a desperate bid to cure his advance bone cancer.

In January he was wheeled into the operating theater at the University of Kansas Hospital in Kansas City.

There, doctors immediately performed surgery to remove the tumor. He then underwent months of proton beam therapy — a highly specialized form of radiotherapy.

Now, the little boy, who was bald for months following chemotherapy, now has a fresh head of hair, thick eyebrows and only a bit of redness on the long scar that lines his surgically reconstructed right leg. 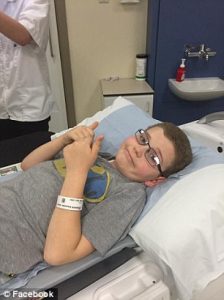 Alex’s issues began around Christmas 2015 when he started struggling to walk. By April of the following year, he was forced to use crutches as he lost the strength in his right leg.

In June 2016, tests revealed he had cancer, and doctors told his parents he would probably only have a few months to live.

His only chance at life was an incredibly complicated operation to remove his cancer-infected thigh bone — and due to the advanced stage of his disease, it could only be done in America.

In January he was able to have the surgery at the University of Kansas Hospital in Kansas City. 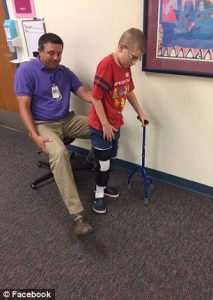 During his time there, the precocious little boy won over the hospital staff with his vibrant sense of humor.

Surgeons have now replaced Alex’s right hip, thigh bone, and knee with mechanical ones. He was also given a temporary artificial femur while a more permanent one was crafted.

Earlier this month, he had a telescopic prosthetic femur put in. The prosthesis can be electro-magnetized to lengthen as his body grows. 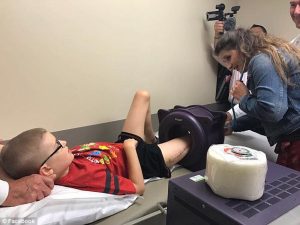 His family expects to fly home on August 20, though he’ll be back in America roughly every three months for tests and to get the leg lengthened as he grows.

Despite instantly starting chemotherapy, Alex’s cancer continued spreading, and by the end of treatment he relied on a wheelchair to move around.

This meant he was left with a significantly-reduced chance of survival, and reduced the treatment options available to him back in England.

Although Ewing’s is notoriously susceptible to radiotherapy, the best kind this treatment — proton beam therapy — is not available in the UK. 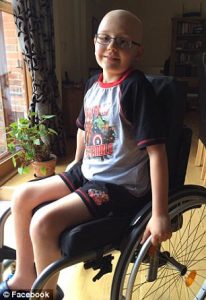 The treatment and travel would cost upwards of £120,000 ($158,000), which they were able to raise through charity events — including a music video performed by his father PC Jeff Goodwin and other Warwikshire officers. 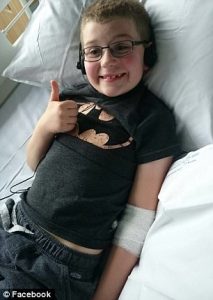 His family is now continuing to raise money for his continued physical therapy and return trips to Kansas city.

They are publishing a book and releasing a documentary, both called Alexander’s Journey, which will tell the story of parents who wouldn’t give up after hearing their son only had months to live, and the thousands of strangers-turned-friends who rallied to help him.