Lord Nelson’s leather armchair from HMS Victory is for sale for £50,000

The George III chair resided in Lord Nelson’s cabin on the ship and from this perch the great mariner read dispatches and pondered his next strategic move against the French fleet. He would most probably have sat in it on the eve of the Battle of Trafalgar where he was killed on 21 October 1805.

The chair was known as ”the Emma” and was said to be his favourite because of its provenance.

After his death the piece of furniture was bought by Sir Francis Lafarey, who captained HMS Spartriate which forced the surrender of the Spanish ship Neptuno at Trafalgar.

Sir Francis bequeathed it to his sister who gave it to her daughter-in-law. The chair then passed to her brother, W.H. Blaauw of Beechland, Newick, East Sussex, whose family it remained with until 1919 when the house and contents were sold.

Lord Nelson’s chair is believed to have sold for about £200. For the past 37 years, the chair has been in the hands of a private collector who has now decided to put the historic item on the market.The chair is a mahogany bergere upholstered in its original leather. 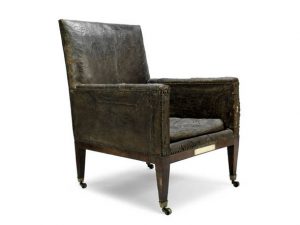 During Lord Nelson’s time on Victory the chair had large pockets at the side for holding dispatches but these have since been sealed over.

Rhyanon Demery, senior specialist at auctioneers Bonhams, said: «The chair has belonged to a private collector since 1980 and it is being sold now because the vendor believes it is the right time to let somebody else enjoy it.

«This is a wonderful opportunity to acquire a very personal piece of British history that was with Lord Nelson at Trafalgar.

“Lord Nelson is an undisputed hero whose leadership played a crucial role in keeping the United Kingdom safe from invasion and there is always great interest from collectors when objects associated with him come up for sale.»

Lord Nelson first met Lady Emma Hamilton in 1793 when he was a post captain and she was the wife of Sir William Hamilton, the British Envoy to Naples.

A year later, after fleeing Naples, Nelson, Lady Hamilton and Sir William Hamilton rented a house in Palermo together. Nelson’s wife Fanny demanded he give up his mistress but he decided instead to separate from her and remain with Lady Hamilton.

He eventually returned to sea, leaving Emma eight months pregnant. Nelson wrote to her pretending his letters were on behalf of a seaman under his command called Thompson, whose pregnant wife was under Lady Hamilton’s protection.

Nelson finally returned to England and his daughter Horatia in August 1805 but could only stay for a month before he was called back to sea to engage Napoleon’s French navy at Cape Trafalgar near Cadiz.

The auction takes place on October 18.