Mother, 41, kills her six-year-old twin daughters by shooting them in the head before killing herself in their Illinois home

29 August 2017 Celisa Henning, 41, and her six-year-old twin daughters, Makalya and Addison, were found dead in their Illinois home in […]

Celisa Henning, 41, and her six-year-old twin daughters, Makalya and Addison, were found dead in their Illinois home in what authorities are now calling a double murder-suicide.

Police said that Henning was found with a self-inflicted gunshot wound to the head, with her daughters suffering from the the same fatal injuries.

Dennis Henning, the woman’s father-in-law and the girls’ grandfather told the Chicago Tribune that the girls stayed home with their mother on Monday.

He explained that his son, who is a plumber, tried contacting his wife during the day but she did not answer the phone.

When he arrived home around 3.30pm, he found the bodies of his wife and twin girls, Dennis said. 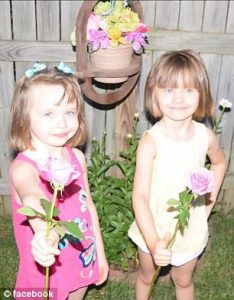 Neighbor Joan Paul said she spoke regularly with the mother and described her as being devoted to her children.

Joliet Police Chief Brian Benton did not reveal how the children or their mother died.

He did say they were found inside of a bathroom in the home.