Woman Leaves Back Door Open As Storm Approaches, Then Walks Inside To Find 3 Baby Deer

Imgur user Amscolie shared her story after accidentally leaving her back door open as a storm brewed outside. Amscolie had taken a few pictures of […]

Imgur user Amscolie shared her story after accidentally leaving her back door open as a storm brewed outside.

Amscolie had taken a few pictures of the baby deer and posted them online, but one day, she got the cutest photo opportunity imaginable.

She went outside to check on the deer she typically cares for, but couldn’t find them anywhere.

“The deer were nowhere to be found,” she wrote on her Imgur account. 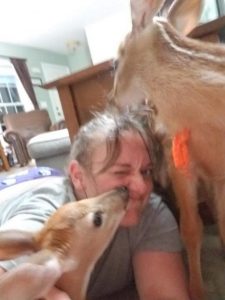 Amscolie worried they had gone missing, not realizing she had left her own back door open, and the little buggers had snuck inside the house.

“Went inside, was heading to the front door, only to see them next to an end table in the living room.”

Yep! There they were, huddled together, feeling safe, making themselves right at home. So cute! Can’t take it!

Animals have been known to have superior weather-detecting capabilities — far better than humans, according to AccuWeather.

They may sense changes in air pressure, or hear sounds at a frequency beyond what human ears are capable of.

Humans aren’t the only ones who try to seek shelter from a storm, and these baby deer seem to be wise beyond their years.