World-famous Italian tenor Andrea Bocelli has sung at a classical concert conducted by a robot. 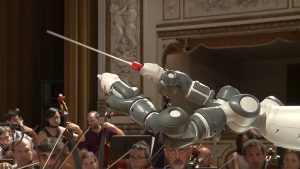 Swiss made two-armed robot YuMi made its conducting debut in the Tuscan city of Pisa.

Resident conductor Andrea Colombini, who helped train YuMi to mimic his movements, was delighted with his pupil’s performance.

There have been other examples of robot-conducted orchestra in the past. The first time was in 2008, when a Japanese-designed machine led the Detroit Symphony Orchestra.