The predictions of famous psychic Jeane Dixon, who met with both Roosevelt and Nixon

Since ancient times, certain people have claimed that they can see events taking place in the future. Some of them, […]

Since ancient times, certain people have claimed that they can see events taking place in the future. Some of them, like Nostradamus, have risen to legendary status. Knowledge of the future, if it really exists, would be a game changer of course. Which is why people who have claimed to possess this knowledge have been so sought after. In the past, predicting the future was limited to spiritual and esoteric circles, but in the 1960s, with the rise of the New Age culture, self-proclaimed seers became a widespread phenomenon. These “gifted” personalities, known as psychics or clairvoyants, still offer their services to people in need today, usually for a certain fee. One such person was Lydia Emma Pinckert, also known as Jeane Dixon, who became famous by “predicting” the assassination of John F. Kennedy.

According to her biography, Dixon grew up in Southern California, where her father owned a car dealership together with Hal Roach (a pioneer in American film and television for producing Laurel and Hardy). At a certain moment in her youth, she was approached by a “gypsy” fortune teller and was offered a crystal ball and a palm reading. She was then told that a great future awaited her, one in which she would become a famous clairvoyant whose advice would be sought by famous and important people. It seems she decided to follow her “destiny” and later in her life, she became an astrologist writing horoscope articles that were nationally syndicated. But Dixon also started to make her first predictions (in some cases she used a crystal ball “to enhance her psychic abilities”) and indeed, some “famous” people started to consult with her. 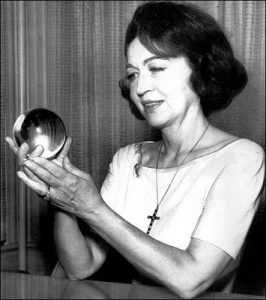 American astrologer and psychic Fair Use

First on the list of these famous people was President Franklin D. Roosevelt, who was in dire need of a vision or divine intervention during the harsh days of World War II. Dixon was called to his office in 1944 to give him advice on some military and personnel issues. If this information is true, it means that some of the military decisions during this year were possibly made according to Dixon’s predictions. Allegedly Roosevelt was interested in knowing how much longer the war would last, and Dixon told him that it would last no longer than the middle of 1945. The war ended close to Dixon’s alleged prediction, but of course, Roosevelt died on April 12, 1945, so he didn’t see it. 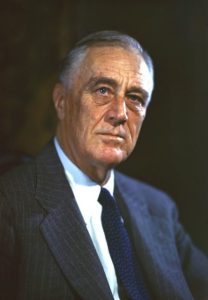 Once she began making her predictions, Dixon never stopped. She constantly had “visions.” She made all kinds of predictions; some of them small and not very significant, but some of them were “prophecies” concerning all humanity. In A Gift of Prophecy: The Phenomenal Jeane Dixon, the biography about her life, which sold 3 million copies, it was relayed that she didn’t make her visions alone. Her prophecies came from God, all her powers were granted to her by God, and she acted as a conduit for receiving these messages and visions. This made her highly popular in Christian circles.

Later, in 1956, Dixon made another startling prediction during an interview for Parade magazine. She told the magazine that the 1960 presidential election would be won by a Democrat candidate who would “be assassinated or die in office.” When John F. Kennedy won, she received huge media popularity, but when Kennedy was shot while in his first term, it became the prediction she was most known for.