by Scott Collie Driving petrol and diesel cars could soon be a no-go in parts of Oxford, UK. A proposal […]

Driving petrol and diesel cars could soon be a no-go in parts of Oxford, UK.

A proposal from the Oxford City Council and Oxfordshire County Council would ban most internal-combustion vehicles from certain areas of the city centre in 2020, ahead of a total city-wide ban in 2035.

The world-first proposal was created because, according to the city council, the Oxford city centre has illegal levels of nitrogen dioxide (NO2) in the air. In 2015, the council says levels were at 152.5 per cent of the legal maximum for NO2.

The council says banning petrol and diesel cars from certain parts of the city would help bring NO2 levels back below the legal limit, before a complete ban helps drop them by another 60 per cent in 2035. 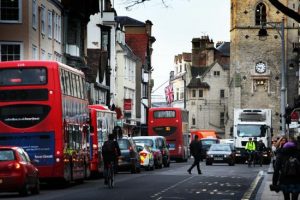 “Toxic and illegal air pollution in the city centre is damaging the health of Oxford’s residents. A step change is urgently needed; the Zero Emission Zone is that step change,” said Councillor John Tanner, Oxford City Council executive board member for ‘A Clean and Green Oxford’.

“All of us who drive or use petrol or diesel vehicles through Oxford are contributing to the city’s toxic air. Everyone needs to do their bit – from national Government and local authorities, to businesses and residents – to end this public health emergency.”

Britain’s Government is planning to ban the sale of internal combustion-powered vehicles in 2040.

Members of the public have from October 16 to November 26 to provide feedback on the plans in Oxford.