A woman and her kids were swimming on a beach, totally unaware that ‘something’ was approaching them underwater

Bethany Bronson and her four children were swimming on a beach in Okinawa Island in southern Japan when a family friend suggested that they record a video message for the family’s father and husband, Capt. Hyrum Bronson, who had nearly completed his six-month tour in Afghanistan.

The family friend asked the kids, “What would you say to your daddy if he was here now?”

Just seconds later, a man clad in military scuba gear surfaced from underwater behind Bethany and her daughter. He then stood upright in the waist-deep water. 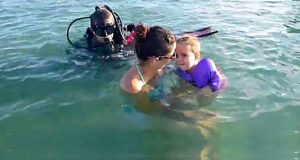 To their immense surprise, it was daddy! They were blown away, as the U.S. Air Force doctor was supposed to still be serving in Afghanistan, and wasn’t expected to return home for another three weeks.

“Are you freaking kidding me?!” Bethany exclaimed.

Hardly able to contain his own joy, the captain announced: “Mrs. Bronson, your husband’s here reporting for duty.”

An emotional Bethany was speechless, as she shed tears of joy. The kids cried out excitedly, “Daddy, daddy!” 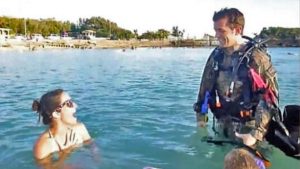 Both husband and wife fell into a long and heartfelt embrace. Meanwhile, the kids waded up to get in on some of the hugs too.

Bethany uploaded the heartwarming surprise homecoming on YouTube, and it has since garnered over 18 million likes!

“After being in Afghanistan for 6 months and 3 months of training in the States before that with only a short month home in between, he is finally home! We thought he was coming home 3 weeks from now, but he is sneaky. We can’t believe he is finally back home with us!” Bethany wrote.