Two American mariners and their dogs have been rescued by the US Navy after more than five months lost at sea in the Pacific Ocean.

Jennifer Appel, Tasha Fuiaba and the two pooches had originally set sail from their home state of Hawaii this spring. They planned a voyage of more than 2,000 miles (3,200 kilometers) south to Tahiti aboard a small sailboat.

About a month into the trip, bad weather caused their engine to lose power, then their mast was damaged, and, as they drifted across thousands of miles of open ocean, the water purifier stopped working.

They sent out daily distress calls that no one heard, until they were rescued by the US Navy on Wednesday about 900 miles south east of Japan, thousands of miles off course.

“They saved our lives. The pride and smiles we had when we saw (the Navy) on the horizon was pure relief,” Appel said of her rescuers, according to the statement. 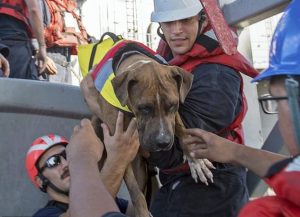 A group of sharks attacked their boat one night, and a single shark returned a day later, she said.

Asked if they ever thought they might not survive, she said they would not be human if they did not. She credited the two dogs, which she called their companion animals, with keeping their spirits up. 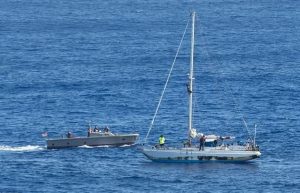 Her mother said she never gave up hope that her daughter would be found.

Appel said they survived by bringing water purifiers and more than a year’s worth of food, mostly dry goods like oatmeal, pasta and rice.