Tiny Girl Asks Prince William To Gallop Like A Horse. No one expected royalty to act like this!

Every year, acts of every talent come together to put on a magnificent show at the London Palladium Theatre for […]

Every year, acts of every talent come together to put on a magnificent show at the London Palladium Theatre for the royal family. This year Prince William and his wife, Kate, the Duchess of Cambridge, attended and it seems like they were having a positively wonderful time.

The televised talent show included a little girl performing on stage who paused to make a special request of the prince who was seated in a private balcony near the stage with his wife Duchess Kate Middleton.

That’s when the little girl asked Prince William to gallop like a horse. William and Kate begin laughing at the request, but what Prince William did next left Kate having a fit of uncontrollable laughter. 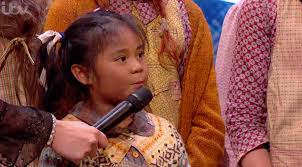 Apparently, the little girl was too cute for William to deny her request, even for a prince and future king of England. Prince William busted out a galloping move that inspired the little girl and the rest of the kids in her troupe to gallop off the stage. The kids were so excited that the prince obliged their little friend’s request that they decided to gallop off stage, too! They are all so darn adorable!

Watch Prince William’s impressive galloping moves and Duchess Kate’s hilarious response to her hubby’s caper in the video below.