19 January 2018 Russian President Vladimir Putin has taken a dip in icy lake waters to celebrate Epiphany, a major holiday in […]

Russian President Vladimir Putin has taken a dip in icy lake waters to celebrate Epiphany, a major holiday in Orthodox Christianity marking the baptism of Jesus.

Surrounded by Orthodox priests and glittering religious icons, and with the temperature hovering around minus 5 degrees Celsius, Putin lowered himself into waters of Lake Seliger some 350 kilometres (220 miles) northwest of Moscow.

Many other Russians followed suit, submerging themselves in lakes and rivers in a widely-observed ritual normally taking place on January 18 and 19 that last year saw two million people take the plunge.

The president marched over the ice covering the lake wrapped in a cream sheepskin coat and wearing traditional knee-high felt boots as priests chanted and waved an incense lamp, in footage shown on state television.

When asked by a reporter, “Is it cold?” the Russian president responded, “No. It’s great,” the AFP news agency reported.

In Orthodox tradition, water blessed by a priest during Epiphany week is considered holy and pure, and believers attribute healing powers to it.

Authorities set up bathing sites for believers all over Russia, including some areas in Siberia where temperatures dipped below -22 F. 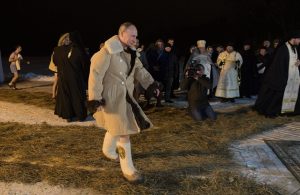 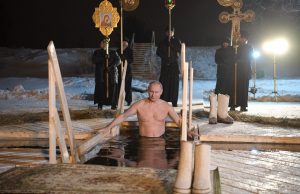 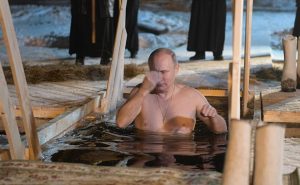