Boy Walks 4.8 Km In Freezing Cold To Attend His School. Heart-breaking story behind the “Snowflake Boy”

“Snowflake Boy” is the nickname given to Wang Fuman, a third-grade pupil at the Zhuanshanbao Primary School in Xinjie Township […]

“Snowflake Boy” is the nickname given to Wang Fuman, a third-grade pupil at the Zhuanshanbao Primary School in Xinjie Township in Ludian County in south-western China’s Yunnan Province.

On January 8, the eight-year-old braved minus nine degree weather walking 4.5 kilometres (2.8 miles) to his school in the county in Shaotong, southern China’s Yunnan Province.

After Fuman arrived at his classroom, his hair and eyebrows were frozen. The boy’s fate caught the attention of millions of people after a picture of his icicle hair became viral on January 9.

He shared the picture just after the red faced boy walked into his rural schoolroom after completing his ice cold march to make sure he could sit an important exam.

The headmaster said: “It was the first day of their final exams. The temperatures dropped to arctic temperatures of minus nine degrees Celsius in about 30 minutes that morning.”

He added that the boy lives far away from the school, and that he is known as the “class clown”, always finding a way to make his 16 classmates laugh.

Fuman comes from a less-fortunate family. The boy sadly does not live with his parents as they are both working in larger cities to earn higher wages.

He stays with several siblings and elderly relatives and is one of tens of millions of “left-behind children” in China.

Chinese social media users, who have liked the picture more than 14,000 times and shared it thousands of times more, have left encouraging messages for the boy.

Many said they hope he can escape poverty by showing such dedication to his education. 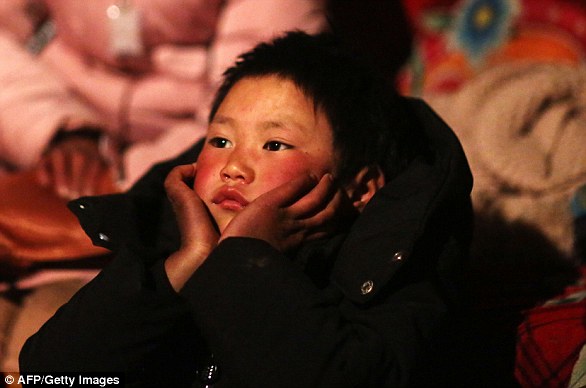 His story moved millions of people in China, who started donating money to him.

Wang Fuman has been given just a fraction of the funds that have been donated to him.

The charity said the rest of the cash would be used to help less-fortunate pupils like Wang.

Previously, the government charity said each student at the Zhuanshanbao Primary School, where Fuman studies, would individually receive 500 yuan (£57). According to China National Radio, Chen Furong, the head of Ludian Education Bureau, said they did not want to give too much money to Wang because they wanted to protect him and help him grow up more healthily.

The authority’s decision has sparked discussions among the Chinese public.

Some agree with the government’s solution because — as one web user put — ‘this way the amount of money could benefit the future of more children’.

While other people disagreed as they argued the authority shouldn’t re-distribute the donations because they were meant for Wang Fuman.