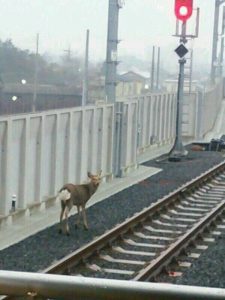 Deer have become especially troublesome in certain parts of the country, sometimes even seeming to actively seek out railway lines. Many are likely just trying to move around their habitat in search of food or mates, but the deer are also reportedly attracted to the lines due to a need for iron in their diets, licking up small iron filings left behind by the grinding of train wheels on the tracks.

People have tried a variety of tactics to rid railways of deer, from setting up physical barriers and alternative iron sources to spreading lion feces on the tracks. The latter plan was abandoned, reportedly both because its smell was too strong to use in residential areas and because it was easily washed away by rain. Deer have repeatedly defied ropes, fences, flashing lights and many other deterrents.

Yuji Hikita, an employee of an electricity division at Kintetsu Railway Co., watched a heartbreaking scene in 2015 caught by surveillance video on Kintetsu’s Osaka Line. A family of deer entered the tracks at night, and one of three fawns at the rear of the group was struck and killed by a train. A parent deer stared down at the fallen fawn for 40 minutes, according to the Asahi Shimbun newspaper.

After seeing that, Hikita racked his brain for ways to stop it from happening so often.

“Despite all our efforts to shut out deer, they still enter the tracks,” he thought at the time, as he tells the Asahi Shimbun. “Why don’t we have crossings for deer?”

Hikita began to study the deer, finding hoof prints and dung along both sides of the tracks. He came up with an idea, and two years later, that idea won a 2017 Good Design Award from the Japan Institute of Design Promotion.

The idea still needs wider testing, but it has already drawn interest from some other rail companies.

In another inventive approach, researchers with the Railway Technical Research Institute (RTRI) have been testing trains that snort like a deer and bark like a dog.

This combination of sounds turns out to be a good way to scare deer, the BBC reports. First, a three-second blast of deer-snort noises gets their attention, followed by a 20-second clip of barking dogs, which is apparently enough to make them flee.

The idea plays on natural deer behavior, which includes “a habit of repeatedly snorting short, shrill sounds to alert other deer when they perceive danger,” according to the Asahi Shimbun.

The institute hopes to conduct broader experiments of the system, and if it proves effective, possibly set up stationary devices to snort and bark along the tracks in places where deer are commonly seen. The noises would reportedly not be blared where near people’s homes are near the tracks, however.