The 33-year-old Houston, TX resident has gone viral after taking a graduation photo with her five children. In the […]

The 33-year-old Houston, TX resident has gone viral after taking a graduation photo with her five children.

In the picture, Champs wears her cap and gown and holds a sign that says “I did it.”

Ieshia Champs took a rather circuitous path to this juncture in her life.

“I really didn’t have any stable guidance at that time. My mom was addicted to drugs. My dad was deceased. And I was homeless,” Champs told CBS News. “I lived with friends or whoever would take me in. Then I got pregnant with the first of my five children, and things just went from there.”

Ieshia dropped out of high school and got a job at a call center to support her growing family. Then, in 2009, when Ieshia was pregnant with her fourth child, she suffered a crushing barrage of losses. She lost her home to a fire. She lost her job. She lost her children’s father to cancer. And then, she says, she lost her sanity.

In the depths of despair, Iesha tells CBS News she tried to commit suicide. Shortly afterward, she received a fateful phone call from her pastor.

“Pastor Louise Holman called me one day and said that God told her to tell me to go back to school and get my GED, because that lawyer I wanted to be, I’ll be it!” Champs recalled. “I thought it was a little crazy because I was too old and I had three children with my fourth child on the way.” 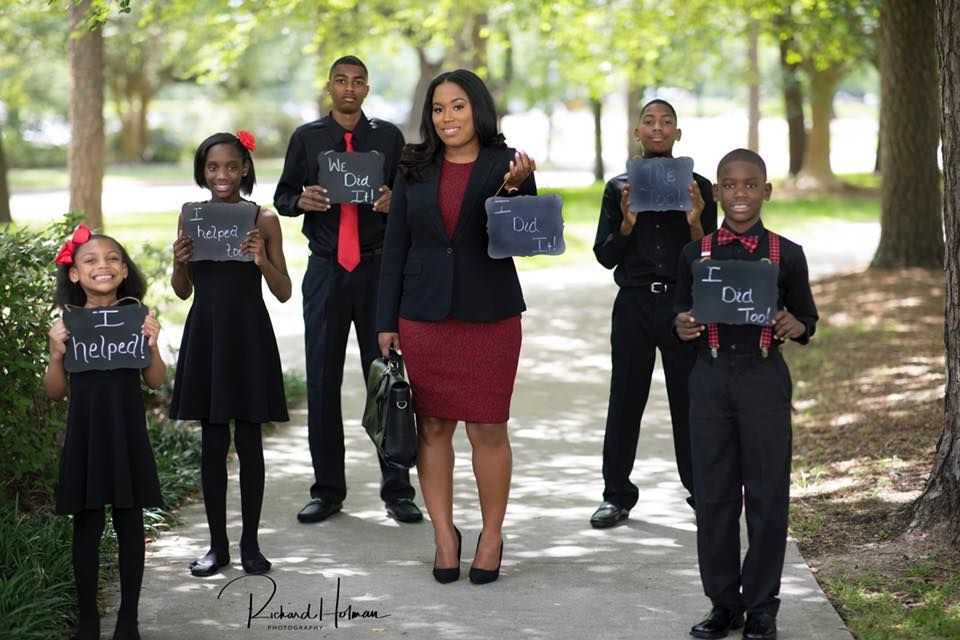 She not only received her GED, but she also earned an associate’s degree from Houston Community College.

Champs holds a bachelor’s degree from the University of Houston and soon, a law degree from Texas Southern.

She says her oldest son, who is 14, has been the biggest help by stepping up to take care of his siblings.

“I took the pictures with my kids because they helped me through school. They’re graduating too!” Champs joked proudly.

“When I look at the pictures, I cry, I smile, and I’m very grateful,” Champs told CBS News. “I see a woman who at one time knew that the odds were against her. Looking at that picture reminds me of the fact that I didn’t just defy the odds, me and my children destroyed them.”

The photo rapidly garnered tens of thousands of likes on social media, with comments rolling in from all corners of the country.

Champs intends to specialize in family and juvenile law and one day become a judge. Champs will graduate in May.