Daredevil Jack Reynolds, from Derbyshire, has become the world’s oldest person to ride a zip wire at the age of […]

Daredevil Jack Reynolds, from Derbyshire, has become the world’s oldest person to ride a zip wire at the age of 106 — and he did it live on camera.

The zipline at Grizedale Forest in the Lake District is 400 metres long and 60 metres high, and Jack took it on at 40 miles an hour.

Jack, who is a great-great grandfather, has earned a spot in the Guinness Book of World Records with the feat, his third record after completely other daring ventures, like getting a tattoo to mark his 104th birthday and riding a rolleroaster on his 105th.

A little while later, Jack was presented a certificate to certify that he had broken the Guiness World Record for the oldest person to zip wire. 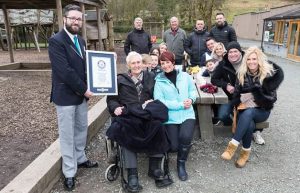 Surrounded by his family, the great-great-grandad gave the camera a big thumbs-up, saying: ‘‘This speaks for itself.’’

He has previously said it is the drop of whisky that he adds to his morning cup of tea which has helped him stay fit and healthy.

Watch the moment below: