A 69 year-old double amputee reached the summit of Mount Everest from the Nepal side on Monday morning, on his fifth attempt to climb the world’s highest peak.

Xia lost his legs after his first attempt on Everest in 1975, when he was part of the Chinese Mountaineering Team, after he lent a teammate his sleeping bag.  Two decades later, both of his legs below the knee were amputated after he developed a rare form of blood cancer, the Washington Post reports. He previously attempted Everest in 2014, 2015, and 2016. In 2014, climbing season was cancelled due to an avalanche. His attempt in 2015 was also cancelled following a 7.8 earthquake that shook Nepal and triggered more avalanches on the mountain. In 2016, Xia got to within 300 feet of the summit when a blizzard forced him to retreat. 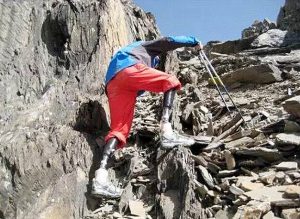 “Climbing Mount Everest is my dream. I have to realise it. It also represents a personal challenge, a challenge of fate,” Xia told AFP last month before heading to the mountain.

In 2006, Mark Joseph Inglis of New Zealand became the first double-leg amputee to climb Everest from the Chinese side, summiting the peak after 40 days of climbing. Three years earlier, a Nepali-born Canadian man, Sudarshan Gautam, became the first person without arms to climb Mount Everest, the Kathmandu Post reports.