‘Spider-Man’ scales building to save a child

29 May,2018 The 4-year-old boy seemed to be suspended from a balcony. An adult standing on a nearby balcony seemed […]

The 4-year-old boy seemed to be suspended from a balcony. An adult standing on a nearby balcony seemed powerless to help. Disaster seemed the only possible outcome.

Then, to the nimble rescue on the streets of Paris on Saturday evening came a young man whom some French people have started to call the Spider-Man of the 18th, referring to the arrondissement of Paris where the episode unfolded.

With a combination of grit, agility and muscle, the man hauled himself hand over hand from one balcony to another, springing from one parapet to grasp the next one up. A crowd that had gathered before he began his daring exploit urged him ever upward, according to onlookers’ video that was shared widely on social media.

Finally, after scaling four balconies, the man reached the child and pulled him to safety. And suddenly, an act of individual courage and resourcefulness began to play into Europe’s fraught and polarized debate about outsiders, immigrants and refugees.

The man, identified as Mamoudou Gassama, 22, is a migrant from Mali, a troubled former French colony in northwest Africa, who journeyed through Burkina Faso, Niger and Libya before making the dangerous Mediterranean Sea crossing to Italy and arriving in France in September, without documentation.

On Monday, after his heroic rescue of the boy, he met with President Emmanuel Macron. Now, he will get the requisite documentation to live legally in France. 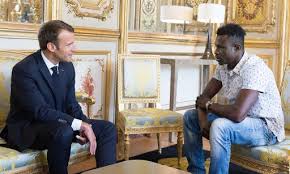 “I told him that in recognition of his heroic act he would have his papers in order as quickly as possible,” Macron said in a statement on Facebook after meeting with Gassama at the Élysée Palace.

The boy saved by Gassama was alone in the apartment while his father went grocery shopping, said François Molins, the Paris prosecutor. The boy’s mother was not in Paris at the time.

Molins told the BFM television news channel that the father had taken a long time to return home because he had decided to play the smartphone game “Pokémon Go” as he was leaving the store.

“He is devastated because he realizes what he did, and the tragic consequences that it could have led to,” Molins said.

The father was taken into police custody Sunday, and an investigation has been opened for “failure to meet parental obligations.” A conviction on that charge carries a sentence of up to two years in prison. The parents have not been identified, as is customary in French criminal inquiries.

The father has been released pending trial.