Bald eagles adopt baby hawk into their nest in Canada

Eagles are known to eat smaller, weaker birds like hawks; that’s why the eagle’s nest in a Sidney neighbourhood is […]

Eagles are known to eat smaller, weaker birds like hawks; that’s why the eagle’s nest in a Sidney neighbourhood is drawing a lot of attention from birdwatchers.

Bird watchers and biologists are stunned by an unusual sighting in a bald eagle nest in Sidney, a Vancouver Island neighborhood in British Columbia, Canada.

A baby red-tailed hawk appears to be living happily in the nest with three eaglets and its adoptive eagle parents!

“This rates as the strangest thing I’ve ever seen in the world of birds of prey,” biologist David Bird said.

“These parents essentially adopted this little guy and as they kept feeding him with lots of food, he’s grown up a little bit now and he’ll be leaving the nest in about a week and a half,” Bird said.

How this happened remains a mystery. Similar occurrences have been recorded but only a handful of times, according to Bird.

“It would require either the eagle to bring them to the nest or the alternative was the hawk somehow laid her eggs in the nest when he was absent,” independent biologist Kerry Fisher said.

The most common theory among biologists is that the mother eagle ‘kidnapped’ the hawk to feed it to her eaglets, according to Bird. 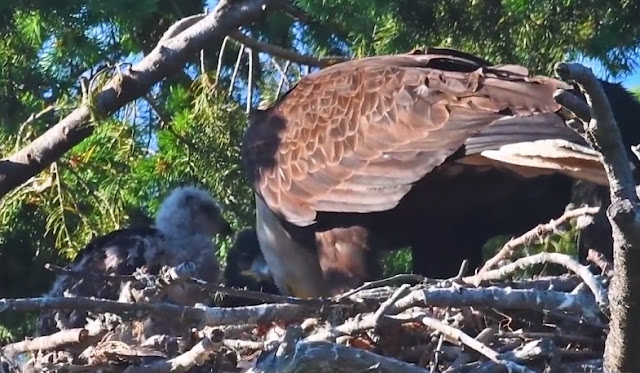 “Because hormones are driving these birds to do what they do it, the hormonal urge to mother it and feed it overtook its urge to kill it and feed it to the other eaglets,” Bird said.

Local birdwatchers have been keeping an eye on the hawk in the nest for over a week. Just when they thought this couldn’t get any more surreal, a local photographer captured a photo that seems to show two hawks in the nest.

Here is one more video of this unusual family of birds.