Police officers and firefighters across America are coping with the stress of life on the front lines by slipping into a downward dog.

The nonprofit group Yoga For First Responders is teaching these emergency workers a better way to handle the demands of their hazardous jobs.

36-year-old instructor Olivia Kvitne Mead founded YFFR in 2013 after she was inspired by her work with military veterans.

“There are lots of yoga programs for veterans but they are all focused on after their tours of duty,” said Mead. “That doesn’t happen for first responders. They are in their jobs for 30 years until they retire. They go to work and see trauma, death, destruction, loss and the worst part of humanity, then they have to go home and be a mother or a father, a husband or a wife.” 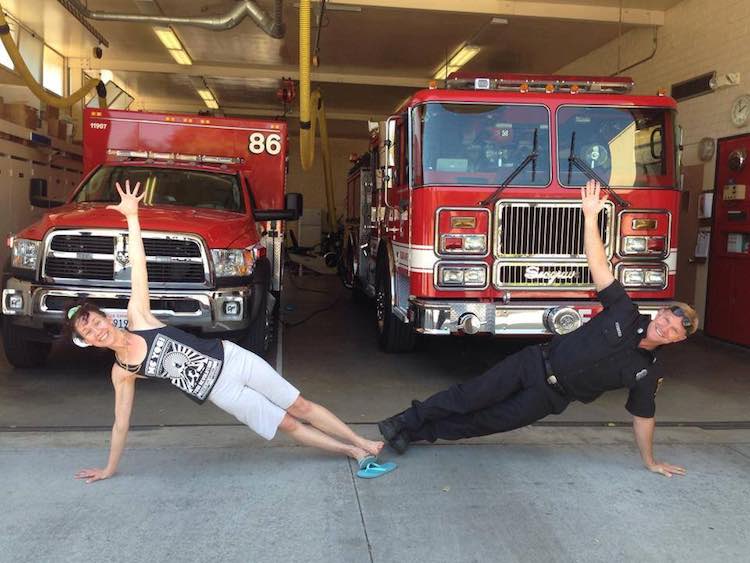 Mead, who is from Denver, Colorado, believed that yoga could help lower their rate of mental health problems, including depression, anxiety and alcoholism.

Mead admitted that not all first responders have been eager to get on the yoga mat.

“I worked with one firefighter in Iowa. He was a bigger guy and he didn’t want anything to do with the yoga,” she recalled. “But I came back to the fire department to give weekly classes. When I explained to him that I was here to help him do his job and sleep well afterwards, he changed his mind about yoga. He came to every single class I did.

“I later learnt that he hadn’t been able to sleep a whole night for a year after being called out to a car accident. He told me one day: ‘After your yoga classes, I was able to sleep last night’.”

Today, Yoga For First Responders works with 35 police and fire departments across the United States, including in Denver; Wichita, Kansas; and Lawrence, Massachusetts.

Mead insisted that yoga not only helps first responders to handle the stress of their job, it allows them to do their jobs more efficiently; especially because teaching deep, controlled breathing allows firefighters to require less oxygen when battling blazes.

“Breath work helps CO2 tolerance in the body,” said Mead. “It means that while a firefighter’s air bottle normally lasts 15 minutes in action, we can make it last longer.

“Yoga strengthens the body and makes it more mobile which is very important for first responders, as their body is their tool—but the true essence of yoga is neurological training.

“It trains the mind and the nervous system to withstand anything by teaching breathing techniques and cognitive behavioral therapy.”