Cody Lutz and his fiancee, Lucy, built up a 9-foot snowman in the front yard of Lutz’s home in Petersburg, […]

Published on 11.02.2019by adminon INTERESTING, OTHER
Cody Lutz and his fiancee, Lucy, built up a 9-foot snowman in the front yard of Lutz’s home in Petersburg, Kentucky.
A heartless unidentified motorist apparently tried to ruin the winter festivities by attempting to run the snowman down while no one was looking.

What the mystery motorist didn’t realize, however, was that Lutz, his fiancee, and his sister-in-law-to-be, shaped the snowman around a large, durable tree stump rooted in the yard.

When they were done, not a shred of bark was visible.

When Lutz returned from work later that day, he discovered tire tracks running through his front yard, which led straight to the base of the snowman — as if someone intentionally tried to run the snowman down and destroy it. 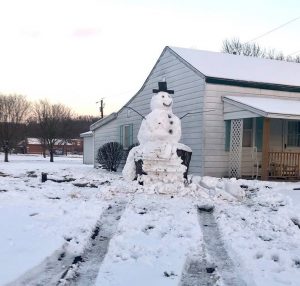 The snowman, however, was not damaged at all. Instead, the unidentified motorist likely received a big dose of reality when he or she plowed into the tree stump with their vehicle instead of knocking the snowman over — as apparently intended.