Instead of Going Out This 4th of July, These People Comforted Scared Shelter Animals During Fireworks

Although this happened last year, we hope to share this beautiful idea with the aim of inspiring others to do […]

Although this happened last year, we hope to share this beautiful idea with the aim of inspiring others to do the same thing this 4th of July.

On the Fourth of July in Phoenix, Arizona, the Maricopa County Animal Care and Control began an experimental program called “Calming Companions,” where they invited the public into their shelters to sit with the dogs and cats. The loud and constant noise of fireworks being set off over the holiday can be a terrifying ordeal for small animals, and even more so in the cramped conditions of a shelter.

Around 200 caring people came out to the event, visiting either of the control’s shelters. These wonderful volunteers brought their own chairs and blankets to sit on as they read, played music, and entertained the dogs. Staff at the shelters provided treats, toys, and games that helped keep the dogs and cats occupied, and the joint effort led to a great experience for everyone involved. 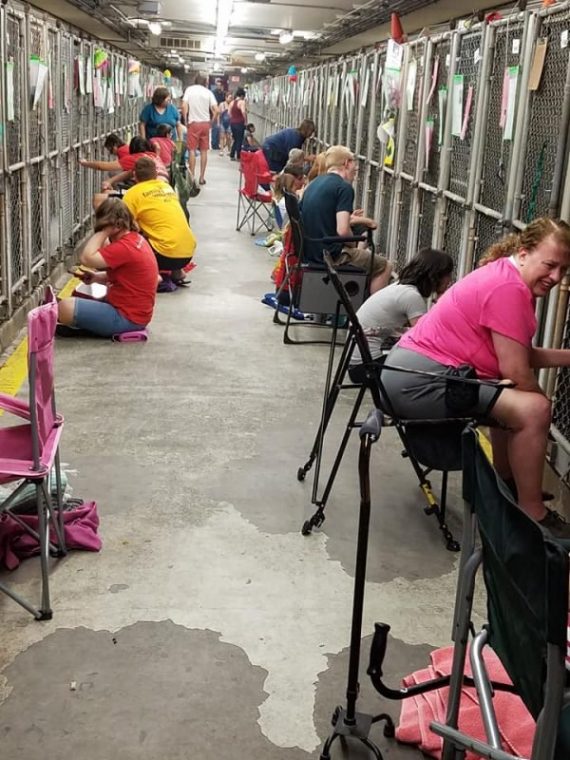 Here is what volunteer Amy Engel had to say: “Ever thought about bringing your dog to crowded places? Even worse, crowded places with fireworks? I promise you dogs don’t like it. Tonight was the first year Maricopa County Animal Shelter presented “Comfort the Canines” … approximately 200 people came to help the pooches. Some people sang to them, some people read to them, some people just sat there and gave treats! it was so so awesome because the dogs absolutely love the attention and were focused on the people and not the fireworks going on outside.”

Maricopa County Animal Care and Control is used to the chaos that Fourth of July celebrations can bring. Dogs startled by the noise of the fireworks can run away, leaving their owners fearful for their safety and well-being, and they often end up being brought into these shelters. This leads to one of the busiest days for the shelters and their staff. Public information officer for the Control, Jose Santiago, said, “We expect it to be a busy day, unfortunately, a lot of people do leave their dogs outside and those loud noises and explosions cause them to dig under fences, sometimes jump over fences, we’ve heard of cases of dogs jumping through windows, all out of fear from those loud explosions.”

This Calming Companions’ initiative was such a success that it will likely be repeated again next year. Maricopa County Animal Care and Control works tirelessly to care for the animals in their community, helping pets be reunited with their families and finding stray animals loving new homes.

Written by Kelly Wang for OneGreenPlanet