Australian mom and wildlife rehabilitator Gillian Abbot rescued this baby roo when it was two months old and raised the orphan, […]

Australian mom and wildlife rehabilitator Gillian Abbot rescued this baby roo when it was two months old and raised the orphan, giving it a teddy bear to cuddle with.

Now almost fully grown, Doodlebug, as he was named, is making another life transition, what animal-rescue folks call a “soft return” to the wild. He comes and goes as he pleases now, and every time the eastern gray kangaroo returns to his homestead, he empties the food bowl and hugs his teddy– just like old times. 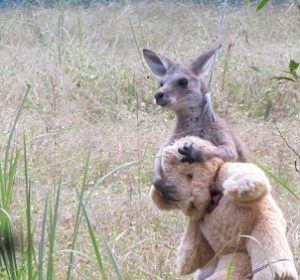 The family shared a photo of the young marsupial holding tight to the teddy bear, which has been thoughtfully tied up to dangle at a huggable height.

“They seem to respond to the toys much in the same way as a toddler. They treat it as a companion,”  Abbot’s son, Tim Beshara, said.

“He is now hopping around the forest and coming back for the occasional feeding or cuddle, as the images show,” he added.