Police in Arizona stepped up in a big way — bringing some winter cheer to a sick toddler. When they […]

Police in Arizona stepped up in a big way — bringing some winter cheer to a sick toddler. When they learned a family in Gilbert, Arizona couldn’t make it out to see a recent snowfall because of the little girl’s condition, they decided to bring the snowfall to her.

2-year-old Quinn Walker had a very special Friday, Jan. 3. She got to play in five tons of snow in her family’s driveway. 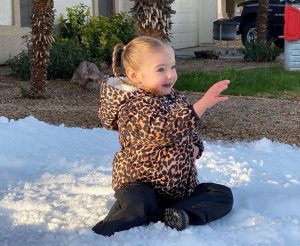 “I’ve been tearing up all morning just watching her and her brothers happy,” Sandee Walker, Quinn’s mother, told KNXV.

According to KNXV, Sandee Walker said she wanted to take the kids up to the high country to see the recent snowfall, but Quinn’s doctors said the trip, with the elevation, would be too much for Quinn.

“She looks completely healthy and normal,” said Sandee Walker. “You would never know that this little girl is fighting to stay alive.”

Quinn was born with the left side of her heart missing. She had her first open-heart surgery at six days old. Most of the time, she requires oxygen, so a trip to see the snow would be tough. 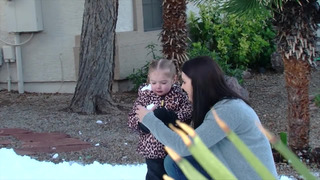 Quinn’s mom shared her disappointment on Facebook, and Casa Grande police noticed. They decided to bring the snow to Quinn.

“Priceless,” said Michael Bejarano with the Casa Grande Police Department. “Just overwhelming just to see her come out and have a smile and play in the snow and play with her brothers.”

“We normally go sledding and make snowmen,” said Adam Walker, Quinn’s father and a member of the Casa Grande Fire Department. “She’s had a chance to throw snowballs at her brothers and do all that stuff here in Gilbert.”