a serious train crash in Moscow:Twenty-eight people sought medical attention after the collision

The collision occured at 22:16 (1916 GMT) Saturday when the driver of a commuter train braked suddenly to avoid hitting […]

The collision occured at 22:16 (1916 GMT) Saturday when the driver of a commuter train braked suddenly to avoid hitting a person on the tracks, the Russian Railways state corporation said in a statement.

The driver of the local train then lost control as his suburban train rolled backwards into the path of the intercity service which followed it on the same line, it was reported.

Its brakes damaged, the train went into reverse and collided with a long-distance train, travelling to the Belarusian city of Brest, that had stopped on the same track, the statement said. 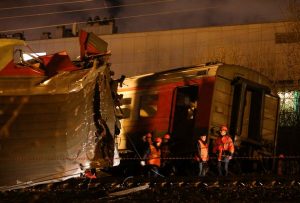 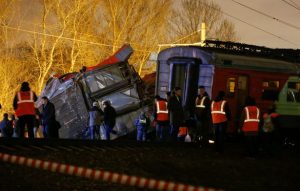 Foreigners were among the injured, according to Emergencies Minister Vladimir Puchkov.

«According to preliminary data, the injured include both Russian nationals and citizens of several countries,» he said.

According to Russian Emergencies Ministry’s Moscow Directorate, the service was restored on Sunday.