Woman Accidentally Buys A Wolf Pup From A Breeder: Then she Realizes Her Mistake

One Oklahoma woman saw an ad in the newspaper for a white puppy with amber eyes. She was meant to […]

One Oklahoma woman saw an ad in the newspaper for a white puppy with amber eyes. She was meant to take him home and called the breeder.The newspaper described the $300 pup as ‘super socialized’ but also explained that he was part wolf — meaning that he is more wolf than dog and is physically very similar to a full wolf.

Despite the puppy’s lineage, the woman decided to bring the pup, who she named Trigger, back to her home. At first, everything seemed normal since all puppies are extremely energetic and untrained, however, by the time Trigger was 5 months old, she realized Trigger was pretty much full wolf.

“Trigger had already eaten part of a wall and she was forced to keep him in a wire kennel in her bedroom while she was at work,” the sanctuary explained. Trigger’s owner couldn’t bear to keep him locked up all day and wanted what was best for him, so she found him a better home at the W.O.L.F. Sanctuary in Colorado.

Settling in at the Sanctuary upon arrival wasn’t easy for the wolf dog.

Trigger was paired with two different wolf dogs — but both never fully warmed up to him.

Luckily for Trigger, his perfect match arrived in the form of Spartacus, another new rescue. 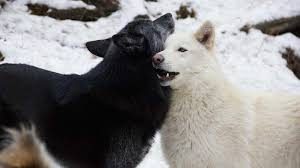 When the two boys were placed together in the same closure, they clicked immediately, chasing each other, wrestling and even sleeping together.

More importantly, Trigger gets to spend the rest of his days running freely in a large enclosure with another wolf dog just like him — instead of as a house pet.