Kim Kardashian West has angered people on Twitter with a tweet about not feeling too well. The 36 year old […]

The 36 year old had taken to social media to cite being ill as a the reason behind her slimmed down figure. 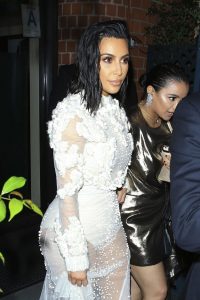 «The flu can be an amazing diet,» she said. «So happy it came in time for the Met lol,» referring to the glitzy annual Met Gala in New York.

The message irked some fans over on Twitter, who criticised the star for potentially sending a bad message about body positivity, among other things.

A doctor has replied to Mrs Kardashian West, writing: «Influenza can be a life threatening condition! Get annual flu shot!»

Another Twitter user said: «Did Kim k really say the flu is an amazing diet ???? What type of airhead believes that.”

And another said: «It sends dangerous messages & supports not being healthy as a valid weight loss technique. But I wonder why eating disorders are so common».