A shocking X-ray shows how dangerous small foods like grapes can be for children, as hundreds are hospitalised for choking […]

A shocking X-ray shows how dangerous small foods like grapes can be for children, as hundreds are hospitalised for choking every year. 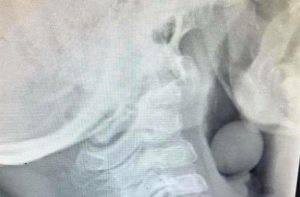 The round fruit was startlingly lodged in a five-year-old child’s windpipe and came very close to cutting off his airway and killing him.

He needed surgery under general anesthetic to remove the grape, but was luckier than the dozens of Australian children who die each year from choking.

Grapes were the third most common foods that children choked to death on, behind only lollies and hotdogs, according to U.S. and Canadian research.

Doctors said grapes were so deadly because their shape and smooth texture meant they easily blocked airways and were difficult to dislodge.

The number of hospital visits is considered just the tip of the iceberg as many times the food is removed by parents or others before an ambulance is needed.

The Royal Children’s Hospital in Melbourne recommended parents always watch children under three while they eat, and food like grapes be chopped up to prevent choking.

“To lower the chances of choking, cut grapes into small pieces or even mash them up for little ones younger than 2” suggests Hansa Bhargava, MD, senior medical officer and expert pediatrician at WebMD . “For kids ages 2 to 5, it’s also a good idea to chop foods into smaller pieces, until you are sure that your child can chew the food.”

Other safety precautions you can take include making sure your child eats sitting upright at a table, and not let them eat while walking around, or even riding in the car.

Finally, avoid letting children younger than age 4 eat any of these foods: