Dog owners would do anything to keep their beloved companions healthy and happy, however, many are forced to say goodbye […]

Dog owners would do anything to keep their beloved companions healthy and happy, however, many are forced to say goodbye when they can no longer afford the costly treatments to keep their sick or injured pet alive.

Yet when one New York couple adopted a French Bulldog puppy named Jones in 2013, they immediately fell in love, began treating the dog like their child, and were prepared to do anything for him. “We were instantly obsessed. My parents even referred to him as their grandson,” Kate Stern said about the dog who was the ring bearer at her wedding with her now-husband Ben.

But when Jones was just six months old, he began vomiting violently and choked on his own vomit, which resulted in pneumonia. “We were so freaked out and had no idea what was wrong,” Kate said. Because his lungs were full of liquid, he had to be put on a ventilator, which cost $10,000. And even with just a 30 percent chance of survival, Kate and Ben didn’t hesitate to spend the money on their ‘son’.

“Your pet’s life shouldn’t have to be a financial decision,” said Ben, who spent every second he could by Jones’ side when he was moved to a pet hospital and spent five days there, which cost $69,000. “It still felt like a family member was in the ICU.” 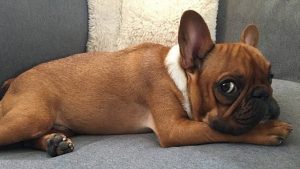 Jones has since need surgeries to treat his chronic lung and esophagus issues and was put on a ventilator three more times. And while pet insurance has covered much of the $155,000 treatment costs, the Sterns still had to spend tens of thousands of their own money. “Our savings has taken a pretty big hit, but it’s worth it to keep Jones with us. He means everything to us,” Kate said.

Jones now has to be fed expensive prescription food and needs nine pills a day, which include his antibiotics, steroids, anxiety medicine, and allergy vaccines, but it’s all worth it to the couple as they watch Jones get better every day. “That’s the best part,” Kate said. “Seeing him get better.”