A fight between two California prisoners quickly raged out of control and forced correctional officers to open fire to stop a scuffle that sent eight guards and seven inmates to hospitals, corrections officials said.

The guards used pepper spray and batons to break up a fistfight at high-security Pelican Bay State Prison near the Oregon border.

“Eight guards were treated at hospitals and released, though one will have to have shoulder surgery. All eight had facial injuries, bumps, bruises and contusions,” said Terry Thornton, a spokeswoman for the California Department of Corrections and Rehabilitation.

Five of the seven injured inmates suffered gunshot wounds at the prison. One was airlifted to a different hospital for a higher level of care, said Terry Thornton. Three inmates who were shot were admitted to hospitals and two were discharged back to prison, she said.

Investigators don’t yet know whether it was a planned attack on correctional officers or if it was gang-related, she said.

“We’re encouraged that the officers weren’t injured more than they were,” Thornton said. 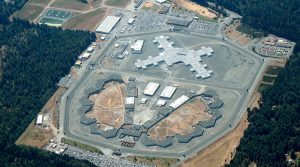