If you’re looking for an adorable way to make your wedding photos stand out, take note of the props this […]

If you’re looking for an adorable way to make your wedding photos stand out, take note of the props this Pennsylvania couple chose to pose with on their big day. Matt and Sarah Crain love spending time with their three rescue dogs, and Matt even proposed while they were out on a walk with the pups. The theme of puppy love continued into their wedding planning; Sarah came up with the idea to take post-ceremony photos with six pups who were in need of forever homes.

Instead of the typical flower bouquets, the bridesmaids held Boxer-Coonhound puppies from Pitties Love Peace, a non-profit dog rescue organization where the bride works. The five puppies are sisters from the same litter and each is adorably named after a former First Lady: Martha, Abigail, Dolley, Elizabeth, and Louisa. Could it get any cuter? Yes, because the bride held a nine-week-old rescue Pitbull puppy named Biggie Smalls.

Caroline Logan, a Lancaster, PA-based photographer, captured this unique wedding memory. Logan said of the puppy photo shoot, «When the bride, Sarah, first came to me with this idea, I was thrilled! While photographing six rambunctious puppies definitely brought an added challenge, it also caused the bridal party to be more at ease. Having something to divert attention from that uncomfortable Oh my goodness, I’m getting my picture taken, what do I do with my hands? feeling to pure puppy bliss made for relaxed photos.» Sounds like the perfect remedy for wedding-day jitters. We hope this becomes a new bridal-party norm. 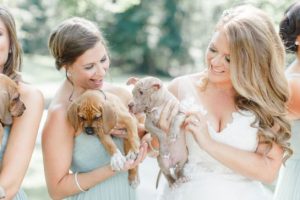 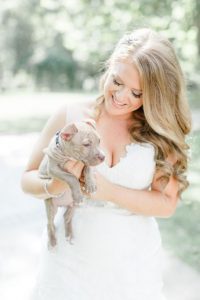 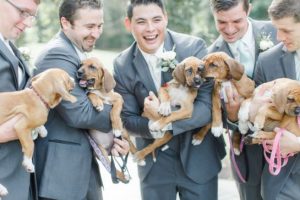 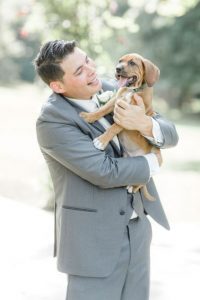 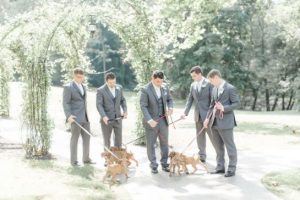