In Japan, there’s a specialty fruit craze sweeping the nation, from square watermelons to grapes the size of Ping-Pong balls. […]

In Japan, there’s a specialty fruit craze sweeping the nation, from square watermelons to grapes the size of Ping-Pong balls. Still, the crown jewel of the luxury fruit basket is the white strawberry, bred to be a whole lot bigger and a whole lot sweeter than its classic red counterpart.

Many people are spending a pretty penny for a taste of these famous white berries.

The Japanese are going gaga over white strawberries, which have been appearing in a growing number of supermarkets. This rare delicacy is referred to as hatsukoi no kaori in the media and translates to Scent of First Love.

The fruit is the brainchild of Miyoshi Agritech Co., which has been developing new varieties of strawberries in the last two decades. Apparently, the insides are also white, but the seeds are red. 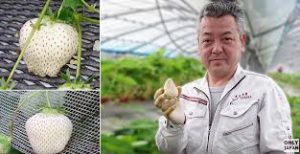 The rare white berriy has the same genetic make-up as the common strawberry but with a flavour and »extraordinary» smell closer to that of the pineapple.

They are reportedly sold in Japanese supermarkets for around US$6 each.

Japan is no stranger to growing extraordinary fruits at exorbitant prices, but the question still remains if we will ever see such success in American markets to sample $10 berries of our own.