After going missing, a 25-year-old Indonesian man, Akbar Salubiro, was found dead inside the body of a python. In one piece. Salubiro […]

After going missing, a 25-year-old Indonesian man, Akbar Salubiro, was found dead inside the body of a python. In one piece.

Salubiro lived in a village on the island of West Sulawesi, Indonesia, with his wife and two kids.

The young father left to harvest palm oil one day, but didn’t make it past his back garden, where a reticulated python had grabbed hold of him, suffocated him and slowly swallowed the man’s body whole.

Friends and family members  noticed that Salubiro was missingand and began the search.
They quickly found the swollen, massive python in the missing man’s backyard and noticed a bulge in the serpent’s stomach that, terrifyingly, matched the shape of boots.

Using an 18-inch long hunting knife, the residents immediately cut the snake open, where they were greeted by Mr Salubiro’s lifeless body. 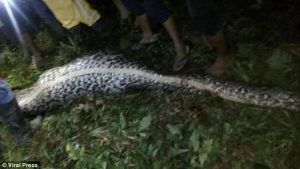 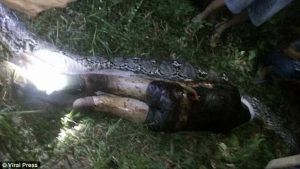 According to the Animal Diversity Web, the specific type of snake is comes from southeastern Asia and western Bangladesh to south eastern Vietnam and on the Indo-Pacific islands west of New Guinea. But reports have recently concluded that the reticulated python has been spotted in southern Florida, Queensland, Australia and South Sudan.

They don’t produce venom and nor do they bite. Like most large snakes, they kill their prey by wrapping around and suffocating it. They primarily hunt birds and mammals of all sizes.

Reticulated pythons are one of the most commonly hunted snakes by humans due to their large size, which guarantees a large quantity of snakeskin that can be sold.