At least 6 dead, 31 missing after tourist boat sinks in Colombia

At least six people were dead and 31 missing after a tourist boat carrying around 160 people sank in a reservoir in northwestern Colombia on Sunday, the country’s air force confirmed. 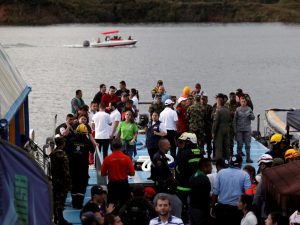 The injured were being treated in the local hospital. Colombian air force helicopters were dispatched and stood ready to evacuate the most seriously wounded.

Witnesses told the El Tiempo newspaper that the boat, named El Almirante – the Admiral – broke in two and that the captain told all the passengers to move to one side of the vessel.

One woman who survived, Laura Baquero, said on television that the two lower decks were “too crowded” and the passengers were not wearing lifejackets.

“We started to feel like the boat was going to capsize,” she said.

She said there were “lots of children” on board. 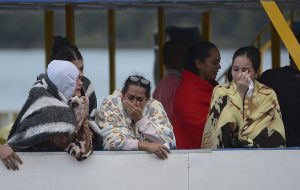 The city of Medellín and the Colombian Red Cross sent rescue crews to the area. It was unclear if any foreigners were on the vessel.

As the search and rescue operation continues, all access roads to the reservoir and the nearby town of Guatapé have been closed to private vehicles.