Teenage racing driver Billy Monger , from Surrey, lost both of his lower legs when he smashed into the back of […]

Teenage racing driver Billy Monger , from Surrey, lost both of his lower legs when he smashed into the back of Finnish driver Patrik Pasma during the British Formula 4 Championship at Donington Park in April.

Eleven weeks later the brave racer has returned to the cockpit of a car at Brands Hatch in Kent.

The teenager returned to the track with the assistance of Team BRIT, which helps injured servicemen and disabled drivers take part in motorsport.

Team BRIT founder Dave Player, a former Army engineer, said the aim of the day was to give the 18-year-old a chance to gain his racing license again. 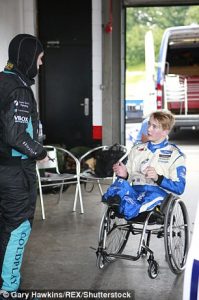 Billy hopes to return to racing in November at the Le Mans 24 Hours, the world’s oldest sports car race.

He hopes to compete with French quadruple amputee Frederic Sausset.

Sports personalities praised Billy for his bravery as he got back behind the wheel today.