More than 1,200 nurses at Tufts Medical Center are set to go on strike Wednesday morning after a last-ditch effort […]

More than 1,200 nurses at Tufts Medical Center are set to go on strike Wednesday morning after a last-ditch effort to reach a contract deal with hospital officials failed.

Both sides spent hours negotiating Tuesday but couldn’t reach a compromise. The Massachusetts Nurses Association said its members would go on strike at 7 a.m. Wednesday. It will be the first strike at a Boston hospital in more than 30 years. 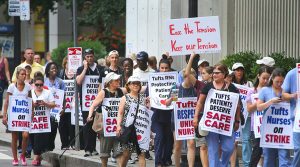 The union and the hospital are at an impasse over staffing levels, pay and retirement benefits.

A union representative says hospital management was “determined to force a strike.” Hospital CEO Dr. Michael Wagner said it’s “extremely unfortunate that the union has continued to hold out for more money and an ill-conceived pension plan.”

The sides have been negotiating a new contract since April 2016.