3 dead, 12 injured after blaze breaks out in a Honolulu high-rise building

At least three people died and 12 were injured Friday in a fire at a high-rise apartment building in Honolulu, Hawaii. The […]

At least three people died and 12 were injured Friday in a fire at a high-rise apartment building in Honolulu, Hawaii.

The fire started on the 26th floor on Friday afternoon.

The blaze quickly spread two floors higher, sending debris, including glass, window frames and chunks of balconies to the street below.

The three dead were found on the 26th floor of the building, which has 568 apartments.

Firefighters were going door-to-door to search for people who might have been trapped in the blaze.

One resident, Karen Hastings, was in her 31st-floor Honolulu apartment when she smelled smoke. She ran out to her balcony, looked down, and saw flames five floors below her. “The fire just blew up and went flying right out the windows,” the 71-year-old said. “And that was like a horror movie. Except it wasn’t a horror movie, it was for real.” 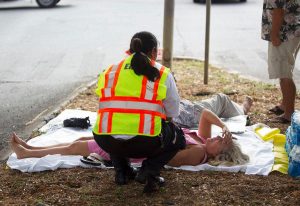 A number of other people were treated at the scene and refused to be taken to the hospital, fire officials said.

The fire was eventually brought under control by 6.30pm by a team of 100 firefighters. 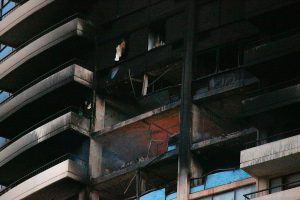