The 1,500 years old Angel Oak is one of the oldest living things east of the Mississippi River

The Angel Oak is a Southern live oak tree located in Angel Oak Park, on Johns Island, South Carolina and […]

The Angel Oak is a Southern live oak tree located in Angel Oak Park, on Johns Island, South Carolina and is one of the largest living oak trees in the world. It is believed to be around 1,500 years old – though that is an estimate and not a definitive age. 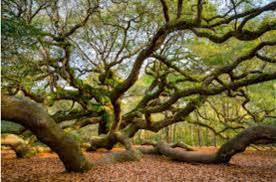 Some locals simply call it The Tree because of its beauty and age and it is an absolute must see for anyone visiting Charleston, South Carolina. 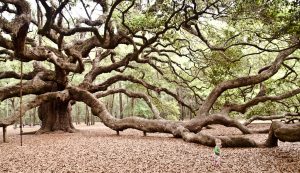 Recorded history traces the ownership of the live oak and the surrounding land to 1717 when Abraham Waight received it as a part of a small land grant. The oak derives its name from the estate of Justus Angel (an African American slave owner) and his wife, Martha Waight Tucker Angel. Local folklore tells stories of ghosts of former slaves appearing as angels around the tree. 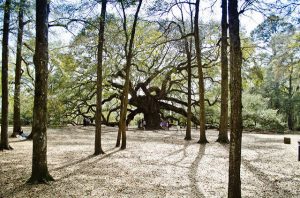 While live oaks are known to only grow out and not upwards, the long history of Angel Oak has allowed it to grow both out and up and this explains why it is so tall. Its branches reach in all directions with some driving underground and then growing back up above the surface. The tree trunks themselves are so heavy and big that some of them drop to the ground, something which is only universal among the oldest live oaks. 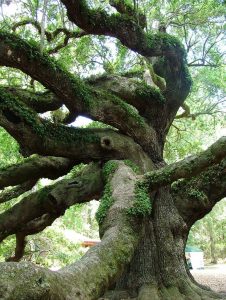 Over the centuries, Angel Oak has survived rough weather including earthquakes, floods and it was damaged severely during Hurricane Hugo in 1989 but has since recovered. The tree is a popular tourist attraction and the city holds cultural events in the park, including the “An Evening under the Angel Oak” series of events. 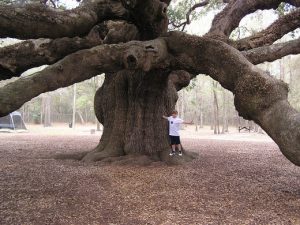 The Angel Tree is featured in the novel The Heart of a Child by Emily Nelson. 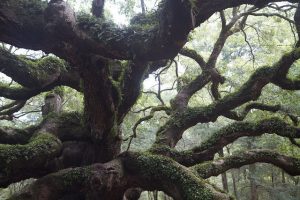 In 1991, the City of Charleston purchased the plantation’s property that the giant Angel Oak tree sits on. In addition to the peace and beauty the angel Oak brings to its visitors, the tree has also been recognized as a 2000 Millennium Tree and as the 2004 South Carolina Heritage Tree.