Emma Wiltshire, 32, from Newport, won four gold medals in the 2017 World Transplant Games — including the 100m sprint — after she suffered near fatal liver damage back in 2014. 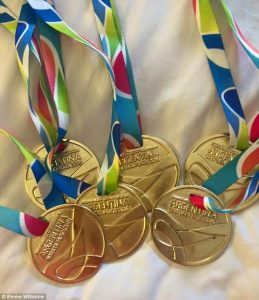 From the age of 14, Emma was a keen athlete — competing at a national level for over 15 years and racing for the Midlands, England and Great Britain in the 100m.

After being diagnosed with sudden acute liver failure following ‘stabbing pains’ in her abdomen, Emma was given dire survival odds by medics. She was only given a 5 per cent chance of survival.

In July 2014, Emma was given the liver transplant that would save her life.

After hearing about the World Transplant Games, Emma set her sights on getting back on the track, and after a year of rehabilitation she competed in the 2015 games, coming away with an astonishing six gold medals and four world records.

Emma recently competed in seven events at the 2017 World Transplant Games in Spain — picking up four gold medals and two silvers (in the high jump and long jump).