Al Grant, of Taylor County, is praising 14 young men for taking initiative and doing good for the community.

When Grant asked the young men who made them come out and clean, they responded in unison, “Nobody.”

“We aren’t in trouble,” one man said. “It just feels good to give back to the community.” 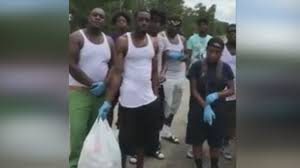 The young men told Grant that they are not looking for any recognition; that “we save money to buy bags and all,” another boy said. “It just brings us together,” he said.

Zac Ross said he’s just doing it for the children in the community.

Ross went on to explain that their community needs unity and positivity, especially in today’s world.

“It doesn’t matter what color you are,” Ross said. “We want to help.”

Grant said that he wishes that he had done this as a boy, and that he feels “real ashamed.”

The conversation was posted on Grant’s Facebook page on July 16. Since posting, it has been seen 3.2 million times.

Grant said he hopes the video will help “promote a positive image of African-American youth.”