Mom and 6 sons cut their hair, donate it to kids in need

One family in Cheektowaga, New York donated more than 17 feet of hair to an organization that helps kids in […]

One family in Cheektowaga, New York donated more than 17 feet of hair to an organization that helps kids in need.

Phoebe Kannisto along with her six sons ventured to a local hair salon to do the big chop.

Kannisto, who has donated her hair since she was a teenager, decided to get her children involved in 2015. 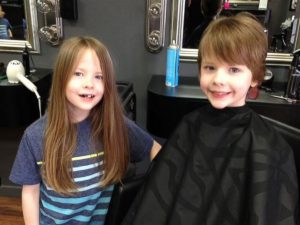 “Three years ago a friend of mine lost her son to cancer and he was also a twin and very similar in age to my twins,” she recalled to ABC News. “So on the first anniversary of his passing my three oldest sons donated their hair in his memory and that’s kind of how it started.”

Kannisto said although her younger children “have a simpler grasp on the concept, they understand that they’re helping sick kids who don’t have hair and can’t grow hair.”

Kannisto said it’s imperative for her to donate to kids who are fighting cancer, in particular, since her husband is a cancer research scientist.

“Cancer hits close to home for everybody,» she said. «Everybody knows someone who’s affected by cancer.”