As part of its iOS 11 operating system, Apple is introducing a system to deactivate notifications with the hope of […]

As part of its iOS 11 operating system, Apple is introducing a system to deactivate notifications with the hope of removing the temptation to check your phone or even type messages while driving.

Apple is about to get involved with your life every time you get behind the wheel. Specifically, the company is trying to save it.

When the company releases iOS 11, users will find a new feature prompting them to activate a ‘do not disturb while driving’ mode, which will prevent any notifications appearing at all. The idea is to take away the temptation for we young ‘uns to look at our smartphones while we’re driving. To be fair, it really is a daft thing to do and it does cost lives. 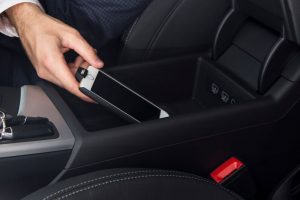 If the phone owner ‘forgets’ to turn it on, the phone can guess when it’s in a moving vehicle anyway, thanks to its motion sensors, GPS and WiFi systems. Trying to ‘unlock’ the phone will be purposely difficult to do while driving, but easy if you’re an innocent passenger.

The system won’t stop you pre-connecting the phone via Bluetooth or USB, allowing you to access some of the device’s functions legally through the car.

The software can also ping a simple reply to anyone who messages the driver’s phone while they’re behind the wheel. Something along the lines of an automated “I’m driving right now and will get back to you when I get where I’m going” is thought to be the gist of it. A similar Android app to perform the same job already exists.