A group of kids, all between the ages of 6 and 12, were having fun in field while taking part […]

A group of kids, all between the ages of 6 and 12, were having fun in field while taking part in an Easter egg hunt, when out of nowhere, they saw a police helicopter flying above them. They didn’t think much about it, but then it continued to circle around.

Soon, the children saw a man running by, a very suspicious one at that. They saw him running in one direction, but as soon as he saw the helicopter, he darted right into the woods. He was trying to confuse the police so he wouldn’t be caught. And so far, it was working.

It was obvious that the helicopters lost track of him, and were planning on flying away. But the children knew they had to help the police catch the bad guy.

They tried everything, waving and yelling. But nothing happened. The helicopters couldn’t see them, and it was useless. But luckily, the kids thought of the perfect idea.

“Let’s lay out the arrow!” 2 kids shouted. And thats exactly what they did.

All the kids fell to the ground and positioned themselves in an arrow, pointing towards the woods. To their amazement…it worked!

The one helicopter saw the arrow, and began to realize that they weren’t just playing around out in the field. They were actually helping them. And because of their help, the helicopter was able to fly overtop of the woods, and locate the bag guy, and then took him into custody. 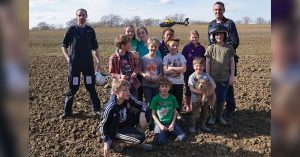 The police were in complete shock of these kids actions. They could not believe that they were so smart as to make an arrow to help them locate the bad guy. And I can’t believe it either!