31 July, 2017 The Duke and Duchess of Cambridge and Prime Minister Theresa May joined the King and Queen of […]

The Duke and Duchess of Cambridge and Prime Minister Theresa May joined the King and Queen of Belgium and some 4,000 descendants of those who fought, for a ceremony to remember those killed in the notorious First World War campaign. 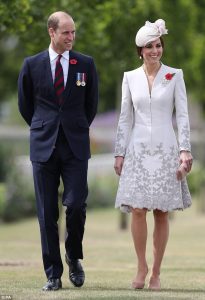 In his address to the gathering, the Prince said: “We remember it not only for the rain that fell, the mud that weighed down the living and swallowed the dead, but also for the courage and bravery of the men who fought here.”

He added: “In 1920, the war reporter Philip Gibbs — who had himself witnessed Third Ypres — wrote that ‘nothing that has been written is more than the pale image of the abomination of those battlefields, and that no pen or brush has yet achieved the picture of that Armageddon in which so many of our men perished.”

“Drawn from many nations, we come together in their resting place, cared for with such dedication by the Commonwealth War Graves Commission, to commemorate their sacrifice and to promise that we will never forget.” 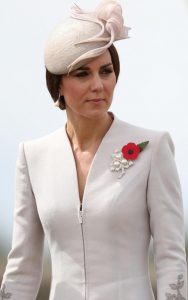 More than 100 days of fighting in the summer and autumn of 1917, starting on July 31, left more than half a million men dead or injured on both sides.

They walked among graves at the Tyne Cot cemetery, which is the largest Commonwealth burial ground in the world.

In total 11,961 soldiers are buried or commemorated there — 8,373 of which unidentified.

During their visit Kate — wearing a Catherine Walker lace coat and sporting a red poppy — was pictured speaking with interns from the Commonwealth War Graves Commission, who tirelessly work to keep the soldiers’ stories alive. 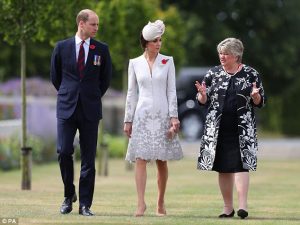 The couple were then given a tour of graves by the commission’s director Victoria Wallace on the centenary of Passchendaele — also known as The Third Battle of Ypres. 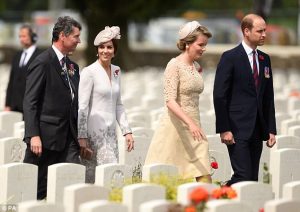 The Prince of Wales then officially opened the Zonnebeke Church Dugout, a preserved First World War dugout which forms part of the Memorial Museum Passchendaele.