Natalie …. the piano player from Melbourne, Australia!! It Sounds Straight From Heaven

You’d never notice this old woman on the street, but hearing her play is magical. Natalie is a beloved piano […]

You’d never notice this old woman on the street, but hearing her play is magical.

Natalie is a beloved piano player in Melbourne who has created this original masterpiece that is stunningly beautiful to listen to. Her music is breathtaking, but the story of her life is marked with much sadness. Her husband left her, she lost two children, and she was at one time homeless. Many times in life great beauty comes from great sadness. Her music tells that story. 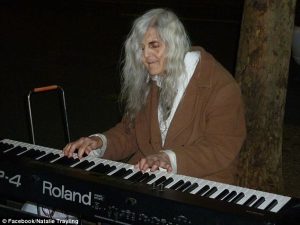 One of Natalie’s surviving children, Matthew Trayling, shared the video of his talented mother and shortly it reached more than 1 million views!

Matthew captured this amazing performance of a piece she wrote when she was just 13. This musical piece was composed between the age of 13 and 14 and finished some years later.

Natalie is obviously a talented pianist, and thankfully she got her big break in the music scene — even if it is during her later years in life! Even though the world has been hard on Natalie, she’s never given up hope on her talent!

This musical piece was composed between the age of 13 and 14 and finished some years later. Another insight into the mind of this musical genius. Enjoy. I made a comment 12 days ago after observing the dramatically increasing views on YouTube of this video I filmed an uploaded of Natalie (my mum) that reaching 100,000 views would be a wonderful gift for her 80th Birthday being tomorrow. Well  …. it seems at this stage (884,272 views) that it might just make “ONE MILLION” at some stage during the day. This is not just phenomenal.. It’s rightly earned by her. The world is listening, and not just listening to an old lady playing piano on the street, but listening to musical genius.