This man devised a plan to surprise his wife for their 10th wedding anniversary, but what happened came as more […]

This man devised a plan to surprise his wife for their 10th wedding anniversary, but what happened came as more than a mere shock to her. She wept tears of joy as her husband’s surprise was revealed… 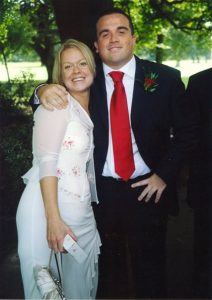 It was on Saturday, July 23, 2016, when Laura Gilbertson was heading out to a shopping center in Liverpool, England, to visit her husband’s parents. At least that’s what the wheelchair-bound wife thought at first. Unbeknownst to her, this was all a ploy by her husband of ten years, Carl, to bring her to the special surprise he’d prepared. 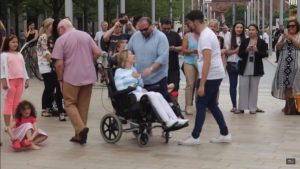 There, surrounded by family members, he gave his wife a rose, as a choir of students Carl had recruited earlier from the Liverpool Media Academy sang Just the Way You Are, by Bruno Mars. 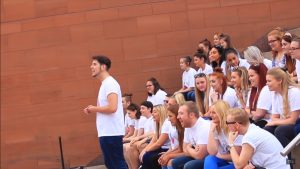 His wife was completely overcome with emotion as she saw what her husband had done for her, especially when two young girls brought forward a banner with the words, “Happy Anniversary Laura.” 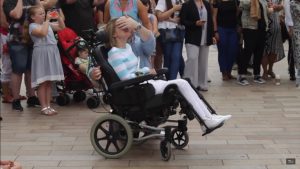 Laura, 36, suffers from a neurological condition called multiple sclerosis. This debilitating disease affects the brain and spinal cord, resulting in all manner of complications—reduced motor ability, mental impairment, and even blindness being only some of the potential symptoms.

Carl, 38, explained the significance of the song performed for his wife, going on to mention that despite how Laura’s condition had deteriorated since the couple met 15 years ago, nothing would ever change his love for her. 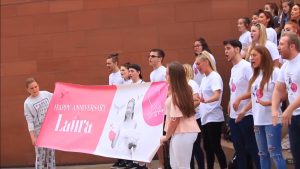 “…the song was important only in the sense that I wanted her to know that no matter what may change, I love her just as she is and that to me she’s perfect,” he wrote in an email to TODAY.