Texas boy dies from ‘dry drowning’ days after swimming — all parents should read this warning!

A four-year-old Texas boy died from “dry drowning” almost a week after his family went swimming at the Texas City Dike, in […]

A four-year-old Texas boy died from “dry drowning” almost a week after his family went swimming at the Texas City Dike, in Texas City.

Frankie went swimming pool with his family. Everyone had a fun time. Frankie’s parents kept an eye on him the whole time and nothing seemed out of the ordinary.

But over the following days, Frankie started experiencing flu-like symptoms, before feeling a bit better.

Then almost a week after Frankie went swimming, the four-year-old woke up in extreme pain and screamed out loud. Seconds later, he took his last breath. 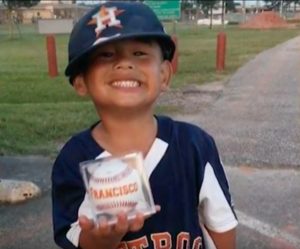 Frankie’s dad was with him when it happened. He immediately called emergency services and an ambulance promptly showed up and rushed the boy’s lifeless body to the hospital.

The doctors and nurses did everything they could, remembers Tara, Frankie’s mom, who watched them try to save her son’s life.

After a while, two doctors came to Tara and told her that they were unable to save little Frankie.

The boy’s lungs were filled with water and he had fallen victim to so-called dry drowning.

Even if a child ingests only a “few gasps” of water in a pool incident, he or she could be at risk of experiencing dry drowning later, Purva Grover, medical director of Cleveland Clinic Children’s pediatric emergency departments said in a 2015 interview.

“You might not witness your child inhale any pool water, but it’s important to watch out for signs soon after an event that could cause dry drowning,” Purva said.

Dry drowning occurs after a child inhales water through the mouth or nostrils and that water gets into the lungs. The lungs spasm, making breathing difficult, and the lungs can become irritated from the water and fill with fluid, according to Purva.

A parent who notices symptoms should take the child to an emergency room for observation. A doctor may decide to drain the lungs. She said that while dry drowning incidents are rare, it’s best for parents to be overcautious.

Frankie’s parents wish they’d known this earlier. If they had, their son would be alive today. Now, they hope that Frankie’s death can at least serve as a warning to others.